My Annual Travel Conference was held in National Harbor, Maryland this year.   Given that so many of our conferences are either in Las Vegas or Orlando, I was thrilled to be able to experience a new destination!     National Harbor is just a short drive over the Patomac River from Washington, D.C. & it is a very cute riverside town.    The conference was at the Gaylord National Harbor Resort & Conference Center, part of the Marriott family of brands.   We have status with Marriott & were lucky enough to receive a complimentary upgrade to a suite!   I'm not sure if it was completely my status or if the Conference folks had given the hotel names of some of their Top Producers or perhaps a combination of both.  In any case, the suite was HUGE and absolutely gorgeous!    We even received a very nice "welcome" note from housekeeping when we got to our room.

You can view photos of the Gaylord National Resort HERE

My conference always has some added sightseeing or events that we can sign up in advance to enjoy & we opted for the evening walking tour of Washington, D.C.  We had a few colleagues who has signed up for the same tour, we met for a quick bite to eat at the hotel restaurant & then grabbed an Uber to the tour meeting point.  The walking tour lasted about 2 hours and it was amazing to see how close everything is, you always think of D.C. as being pretty big when you consider all of the history and monuments, but we really covered a lot of territory & it was at a very comfortable pace.  We had a group of about 10 people & a wonderful tour director.   I would highly recommend doing an evening tour, it's so nice to see all of the monuments lit up for the night. 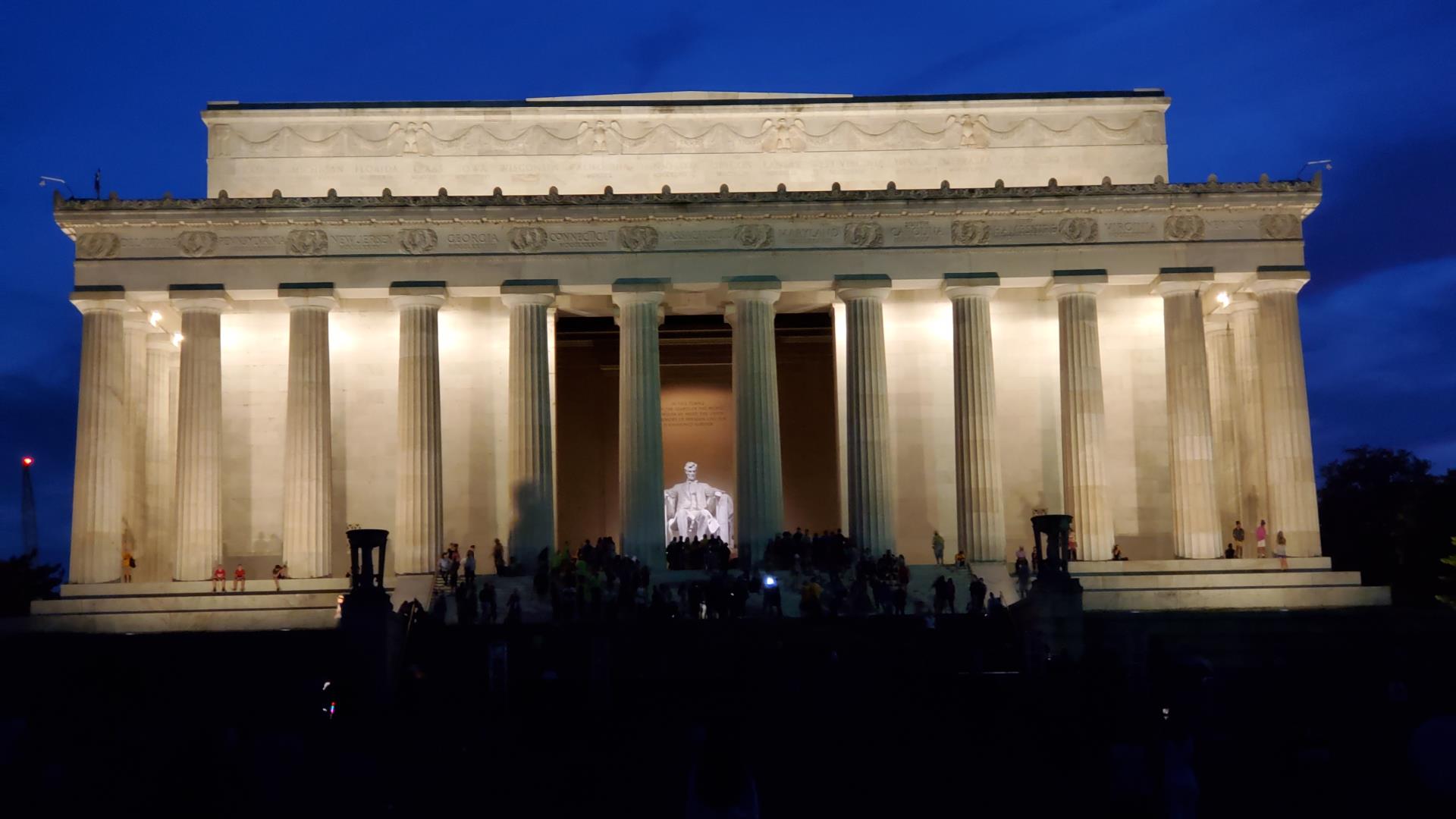 The next few days were filled with conference things, but we did manage to walk down to the Harbor two nights to have dinner with friends.  We found the little Harbor area to be pretty lively, lots of places with live music & many restaurants.   We dined at a Rosa's Mexican Restaurant & Bond 45 Italian Restaurant.  Both were very good, we enjoyed our meals and had great service.  Bond 45 has great views over the Patomac.  We did a little shopping around town & also rode the Capital Wheel, which is the big ferris wheel with views.   One of the nights, the conference bussed us all into D.C. to the Newseum Museum for an evening cocktail reception.  Very interesting museum & great views of the Capitol Building from the Mezzanine Level!   After ending the conference which happened to be our Anniversary, we transferred to the Mayflower Park Hotel in Central D.C.

The Mayflower Hotel is part of the Autograph Collection, a boutique brand in the Marriott family.  It is also a very historical hotel & has been open since 1925!   Lovely hotel with a great atmosphere.  I had submitted a request to use my upgrade certificates & we were upgraded to another suite at this hotel.  The room was beautiful!  After we unpacked, we then walked a few blocks to have dinner at Morton's Steakhouse for our Anniversary.  It was the middle of the week & the place was pretty quiet, we were surprised that it was that quiet.  They gave us a lovely table, took great care of us & we had a fabulous meal.  Of course, so much food!   We made the brilliant decision to bring our leftovers back to the hotel since we had a refridgerator, we cut the steak up into bitesize pieces & that was breakfast the next day!

You can view photos of the Mayflower Hotel HERE

We spent our next day on the hop on/off bus around D.C. to get an overall view & then make our plan for the next day.  We knew we only had two days & we did get a late start after sleeping in a bit & eating our steak breakfast!  We took the bus around, was different to see 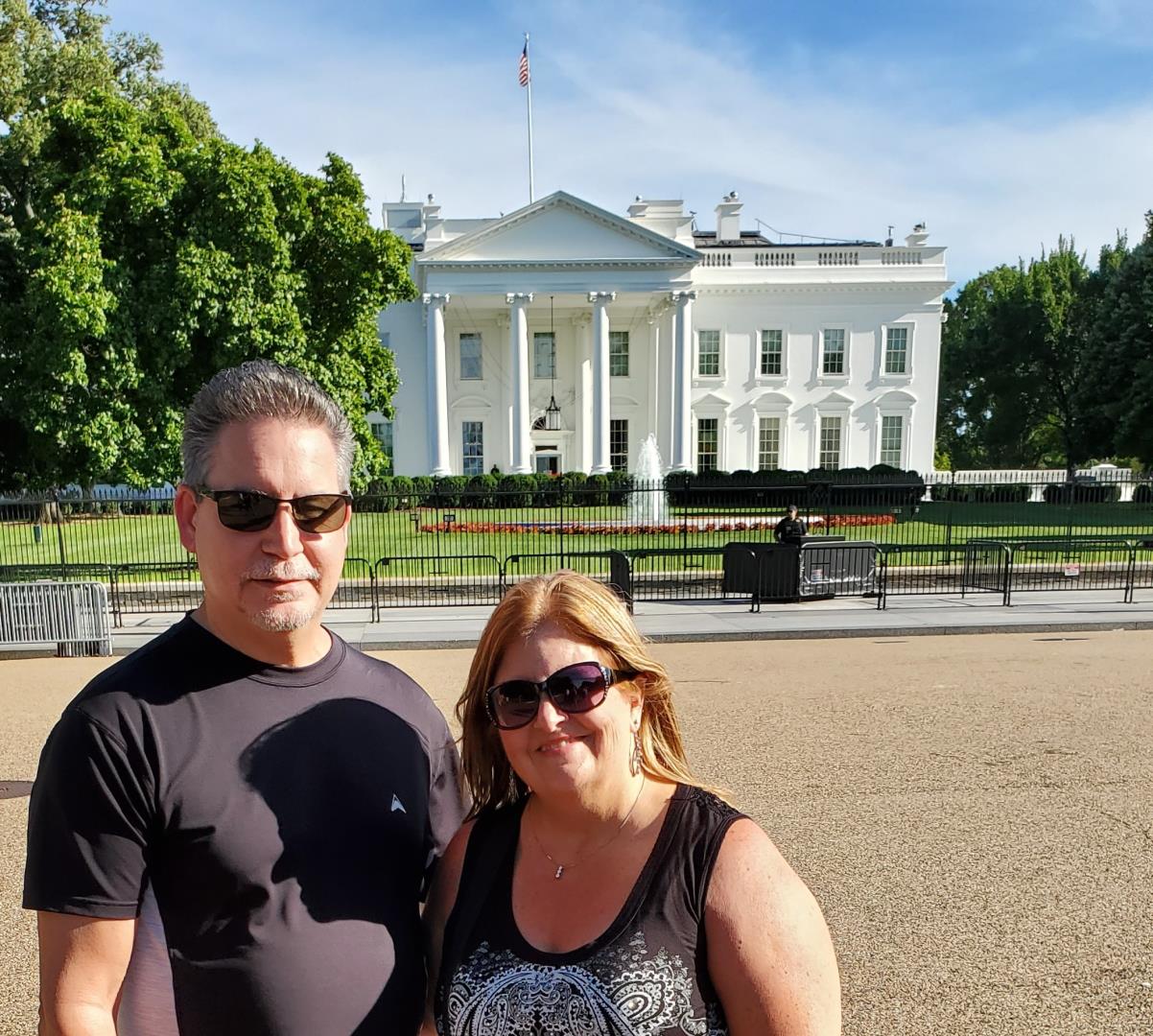 everything in the daylight, we eventually got off close to the White House so that we could walk there & take our photo in front.  What we found to be hilarious is that earlier that day we had walked to the hop on/off bus stop & never knew at that point & time that the White House was right behind us.  It wasn't until we were going to walk back towards our hotel that things began to look familiar & we realized we ended right about where we started!

After a full day of hopping on/off and walking around D.C., we got back to our hotel, had a cocktail, kicked our feet up & decided where we wanted to go for dinner.  We picked a place off of Yelp Reviews called Giovanni's Trattu, which was the cutest little hole in the wall place.  Seriously, it was a hole in the wall!! If they did not have a sign outside, you'd never know you had just passed by a restaurant.  Cute place, with interesting wall hangings, I felt as though I was in Italy!!!   Food- everything was homemade, service was fantastic and the food was absolutely delicious!   I am definitely one to "milk" special occasions as much as I can, so they were well aware that it was our Anniversary & they did not disappoint!   We thoroughly enjoyed this place & it was an easy 3 block walk from our hotel.

Our last day in D.C. was our Arlington National Cemetary & "Museum Day", we did pretty well.  We mapped out the places that we really wanted to go, checked the hours of operation because they all have different opening and closing times & then we were on our way.   We grabbed an Uber to take us out to Arlington and we were there pretty close to opening time.  We spent close to 2 hours there, walked to the Tomb of the Unknown Soldier, watched the changing of the guards, watched the visiting students carry the wreath- all very touching.  We visited the Kennedy grave-sites & did a little more walking around before leaving.   We called another Uber to take us to the Hirschhorn Museum, once we exited this museum, we walked through a few Sculpture Gardens on our way to the National Air & Space Museum.   We were then ready for some lunch, we found a cute place along the National Mall and relatively close to our next stop, The 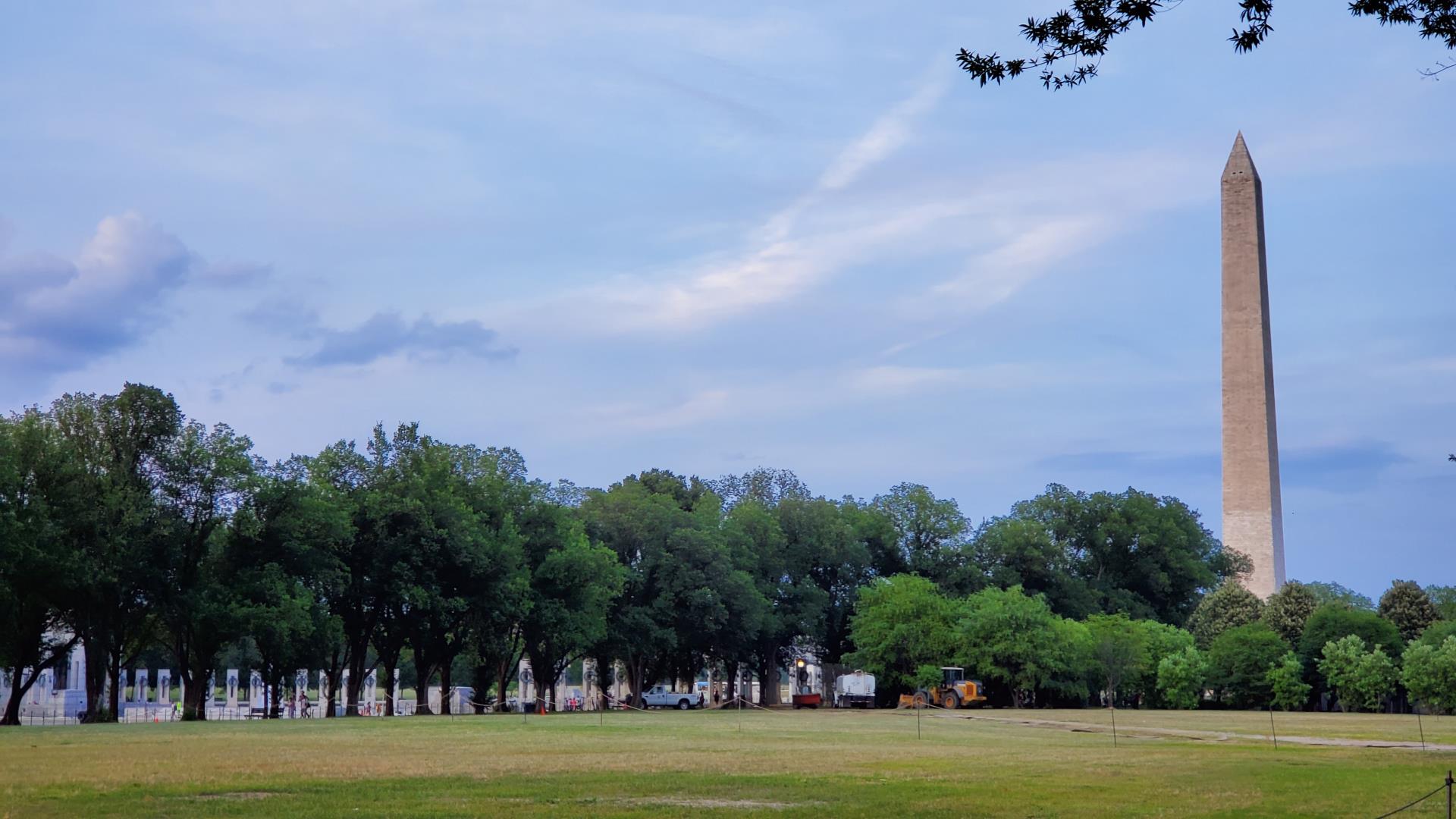 National Museum of National History!  We then took another Uber to the Spy Museum where we finished out our day!   We enjoyed something from each place.   The Hirshhorn had some "odd" pieces, but some interesting ones too. We were able to go through this 3 story place in about an hour.  The National Air & Space Museum was pretty interesting overall & we probably spent about 2 hours there.  The National Museum of National History was crazy busy, there seemed to be a lot of school groups.  Probably the last week of school with various field trips, but we were getting tired & too many people, we got to the point where we looked at each other & said "let's get the heck out of here!"  The Spy Museum was interesting, but not as cool as I expected it to be.  There were a lot of inter-active things to do, but really geared more for children.  We were also tired, so that could have played a part in our overall enjoyment.  We caught an Uber back to the hotel & decided to dine at the hotel restaurant for the night.  We had an early ride the next day to the airport.

We had great weather throughout our trip, a little rain one evening while we were in National Harbor but it was really nothing that bad.  We had umbrellas and used them for a short 5-10 minutes.  I had been to Washington, D.C. once in High School, so a very LONG time ago.  My husband had never been, so we really enjoyed our visit.  We saw plenty of sights, went to more museums than we would normally visit, we had some really great meals & had good times with travel colleagues at the conference.

To see more photos from our trip, focused mostly on the sightseeing- CLICK HERE

As I mentioned earlier in this review, I was recognized at my conference for being the Top Producer for our hotel booking tool, PinSIGHT.  It was pretty cool to be called up on stage at the awards ceremony to be recognized.  This was Top Producer of all Travel Leaders Network agencies in the United States, so it's a relatively big deal.  I was very proud! 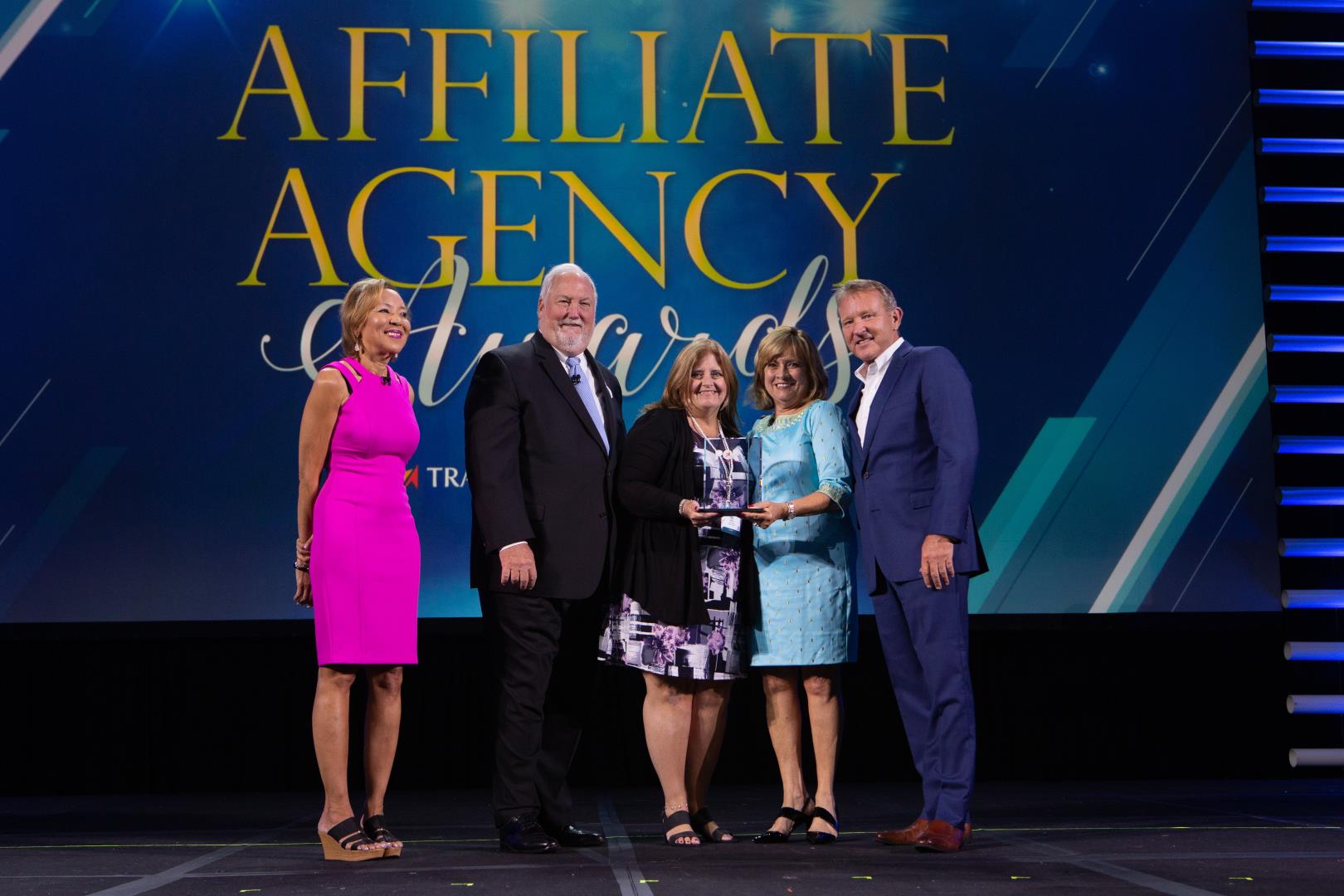