This review is being written September 2019.  I got a little (ok, VERY) behind with writing my trip reviews & I am finally finding some time to catch up.   I love the holidays and I love Disneyland, so visiting the Parks in December is just the epitomy of Magical!   We visited the parks a few years ago at Christmas with our Godkids and their family and they loved it so much, we decided to do it again...and I can say as I write this review, we are booked to visit again this December, 2019!

Whenever I visit Disneyland, I try to rotate where we stay.  Since we had stayed at the Grand Californian in September with friends, we decided to stay at the Disneyland Hotel this time around.  The price point was also much more favorable for our dates! 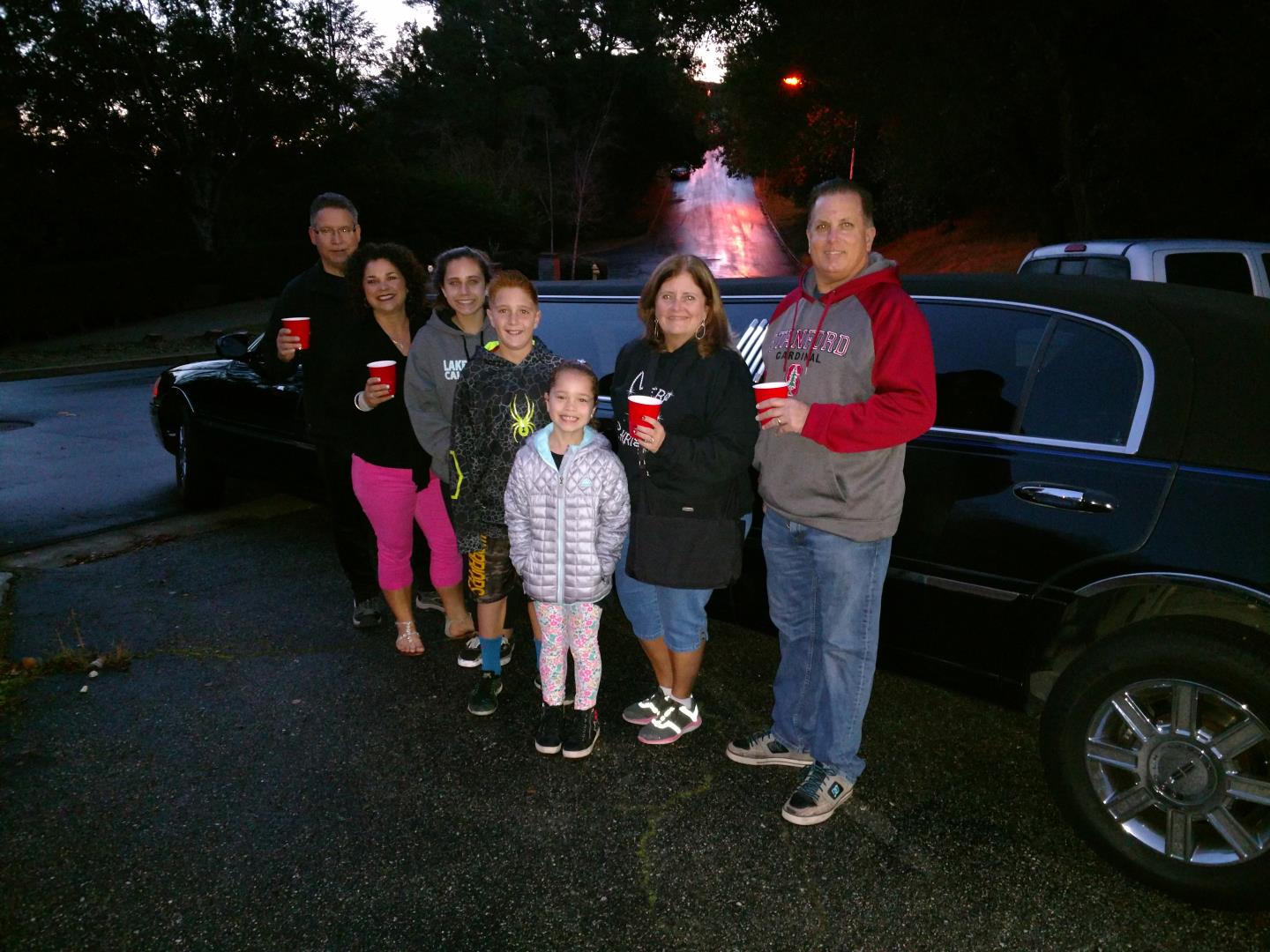 We started our trip with a wonderful ride to SFO using Midnight Limousine.  Ted has been driving our friends to the airport for over a decade, we have used him personally ourselves as well.  He's friendly, reliable and has become a lot like family!  We flew down dark and early on a Sunday morning, checked into the hotel, dropped off our bags to the bellman for storage and then headed to the parks!  We started the day in Disneyland and didn't get very far until we were all in need to a quick snack and COFFEE!  So Starbuck's on Main St. U.S.A. was our first attraction!  After a full day and an early morning, we were all running out of steam and were very interested in a nice dinner, so we headed over the Napa Rose at Disney's Grand Californian Resort to see if we might "score" a reservation for the night.  They couldn't get us into the dining room, but since they were just opening up we were able to get tables in the lounge/bar area and they do allow kids in that area, so we were happy to have a nice sit down meal.  Afterwards, the younger two kids and oldest two adults were beat..so they went back to hotel while my BFF, her teenage daughter & I went back to the park!  Initially, on a hunt for a special blinky hat and when we couldn't find one after going to 3 different hat stores, we decided to enjoy a few rides and opportunities for festive photos! 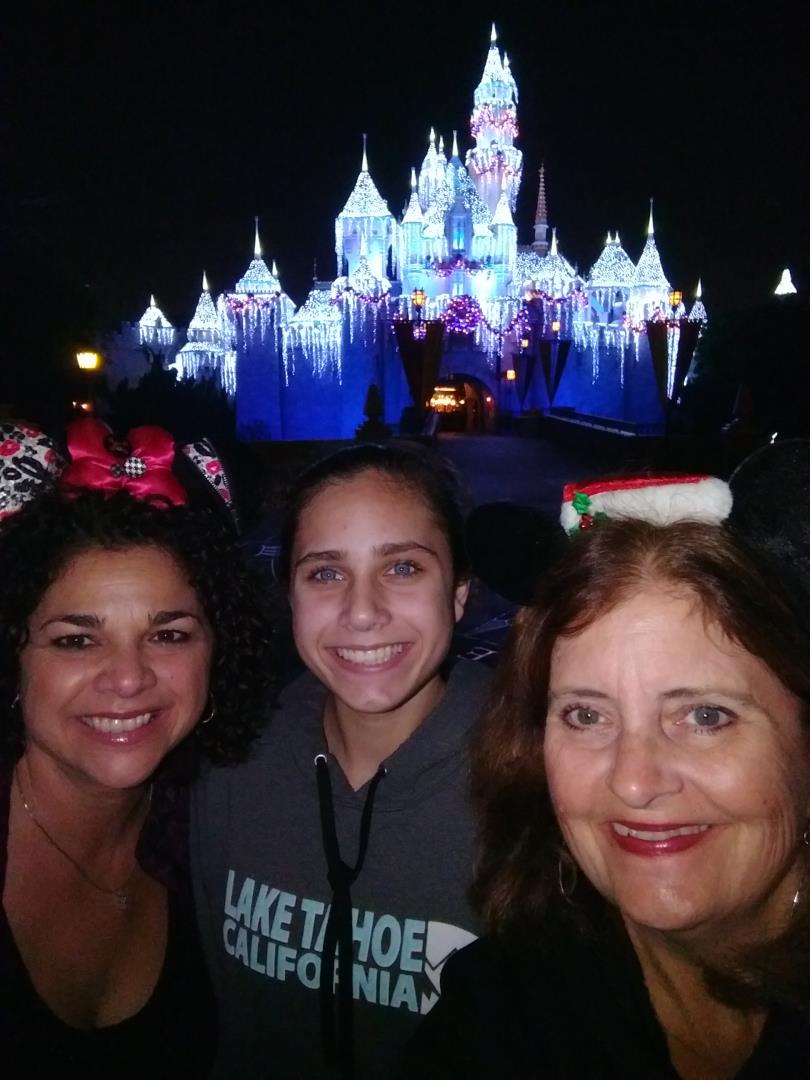 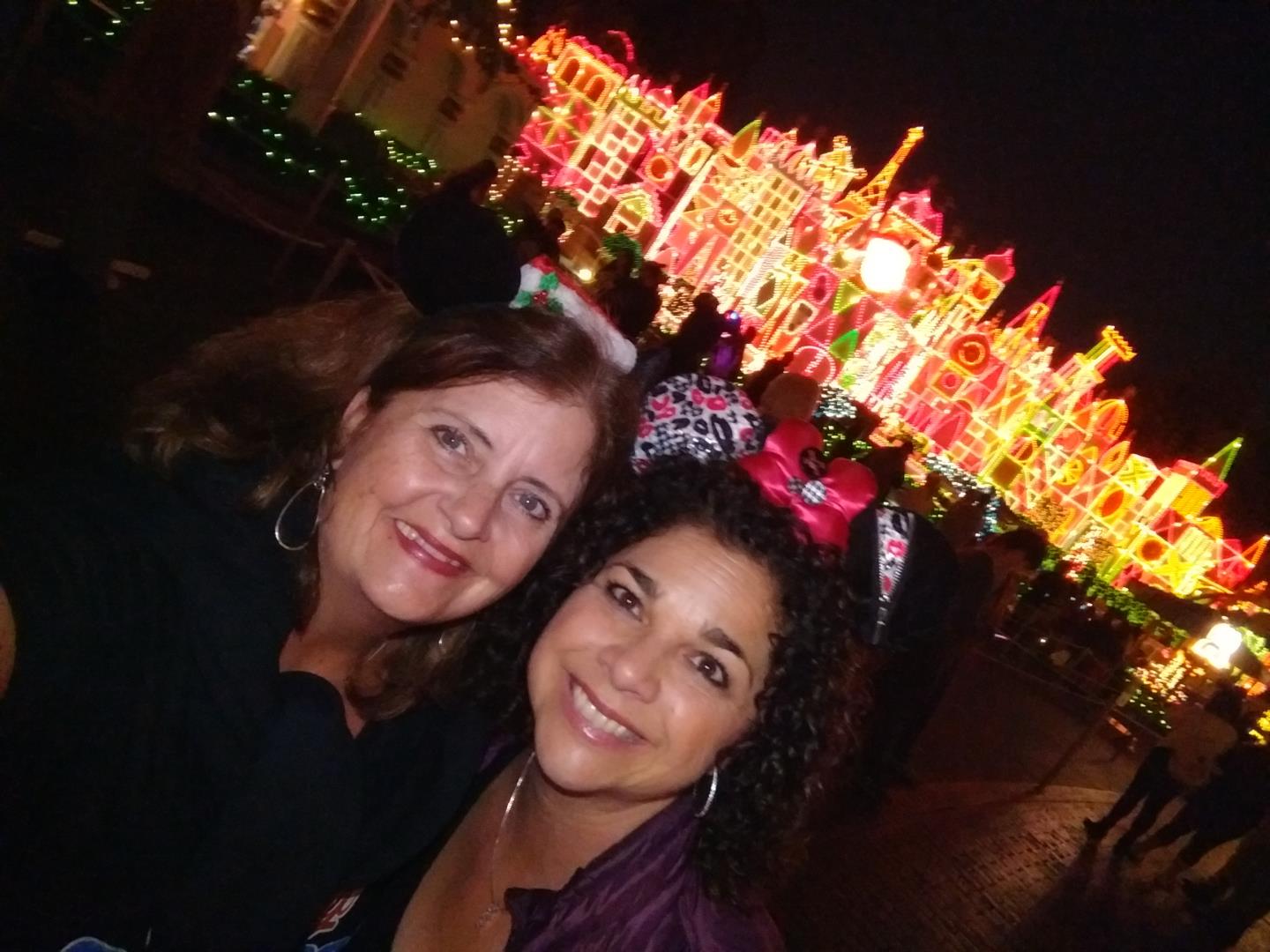 Monday we were up early and headed into California Adventure for "early morning" entrance, though we weren't really early enough to enjoy the feature.  It's hard to get 7 people moving that early in the morning..especially 3 very tired youngsters!   But we did get there and started to enjoy the park and all of the wonderful attractions.  It was a full day, but I have no idea where we dined or what we did that day!  Just keeping it real!  LOL 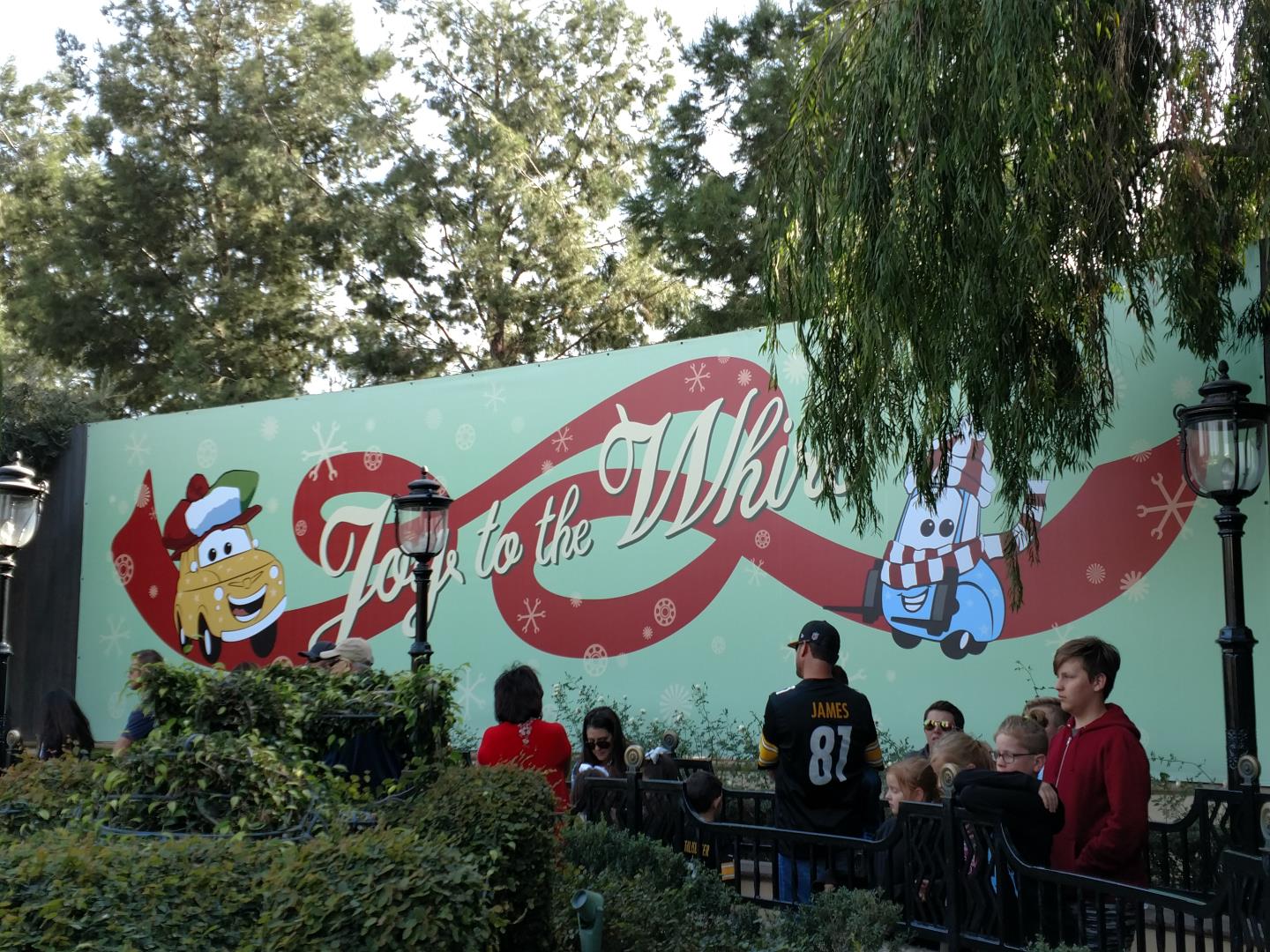 Tuesday was our last day and we took advantage of the early morning hours at Disneyland and rode everyone's favorite rides, did some shopping and then ventured over to California Adventure for lunch at the Trattoria, followed by some more attractions, shopping, face painting & lots of walking around!   Once we were "done" for the day, we had dinner at Downtown Disney at Brennan's Jazz Kitchen and it was our first time dining there, no complaints.  We thoroughly enjoyed our meal and service was very good.   Our friends had 3 day park hoppers, so this was the end of their 3 day park visit.  However, since Bill & I knew we were going to visit the parks twice in 2017, we had purchased the annual pass in September.  As we're sitting at dinner, I said to Bill,  "hey, we can get up early tomorrow and go to California Adventure for the early entrance before our Goofy's Kitchen 9am breakfast reservation!"  Bill replied to me, "YOU can get up early, but I am sleeping!"

Wednesday morning, my alarm clock went off at 615am, I got myself ready as quickly as I could and high tailed it over to 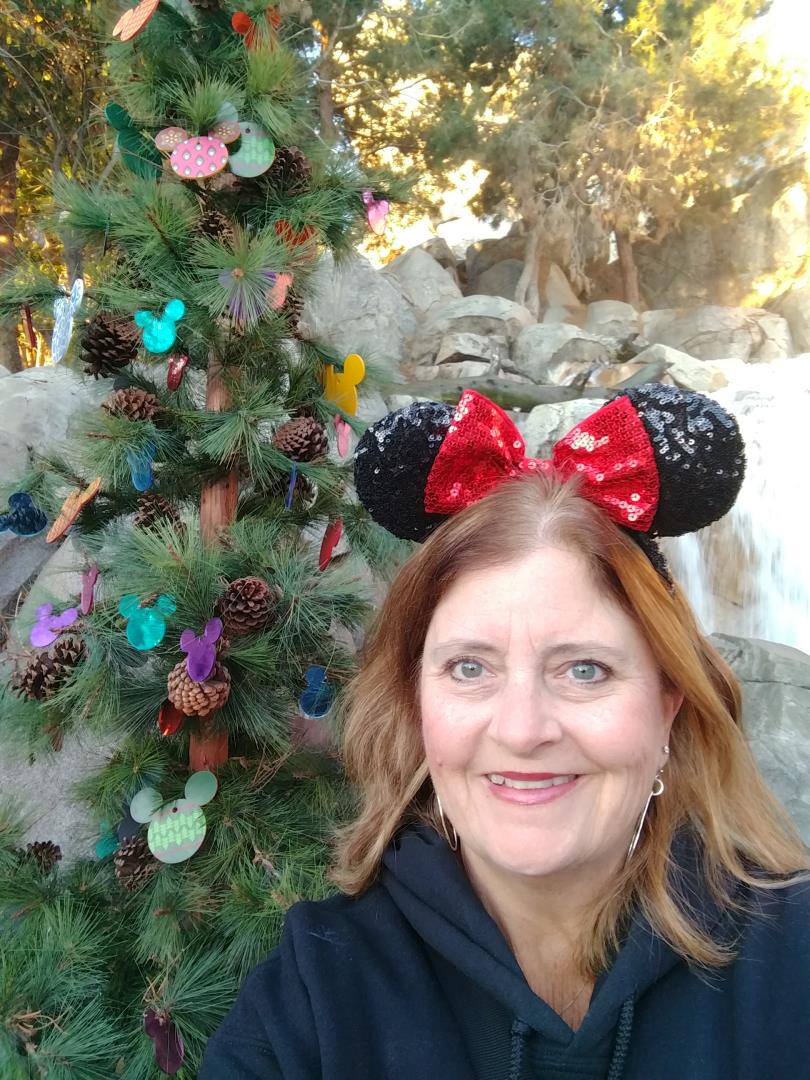 California Adventure when they opened at 7am!  By 830am, I had rode California Screamin' 3 times in the front row,  Toy Story Mania 4 times, Radiator Springs Racers 3 times in the single rider line, Guardians of the Galaxy once.  On my way back to the hotel, I stopped in one store to see if they had received any Rose Gold Mickey Ears and was able to score 2 pairs for friends who had requested them!   I arrived at Goofy's Kitchen at 850am and the rest of the gang arrived 10 minutes later.

We had a great Character Breakfast to finish off our wonderful trip, returned to our rooms to finish packing and then met our ride back to the airport for our early afternoon flight home. 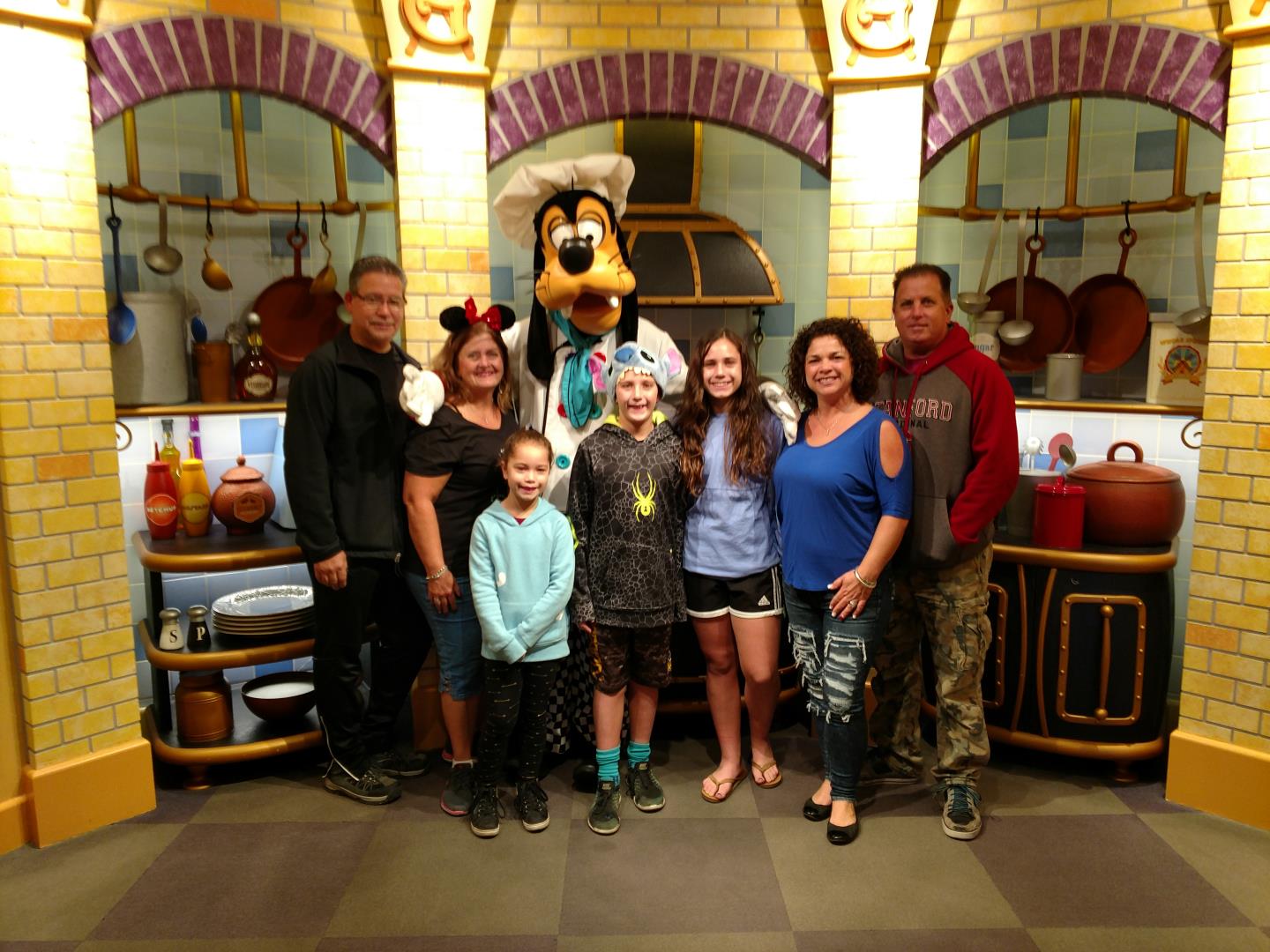 We agreed that the early flight down is brutal and that we'd much prefer to fly the night prior later afternoon/early evening allowing time for a nice dinner and maybe some shopping, then have two full days at the parks and a little more than a 1/2 day before returning home late afternoon/early evening.  That's exactly what we'll be doing this year!

If you love the holidays & love Disneyland ~ they you really have to experience the combination!  It's the perfect way to kick off the holiday season, we try to plan our trips early December so that there are fewer crowds and for the older sibling who is in High School, easier to miss a few days not so close to finals! 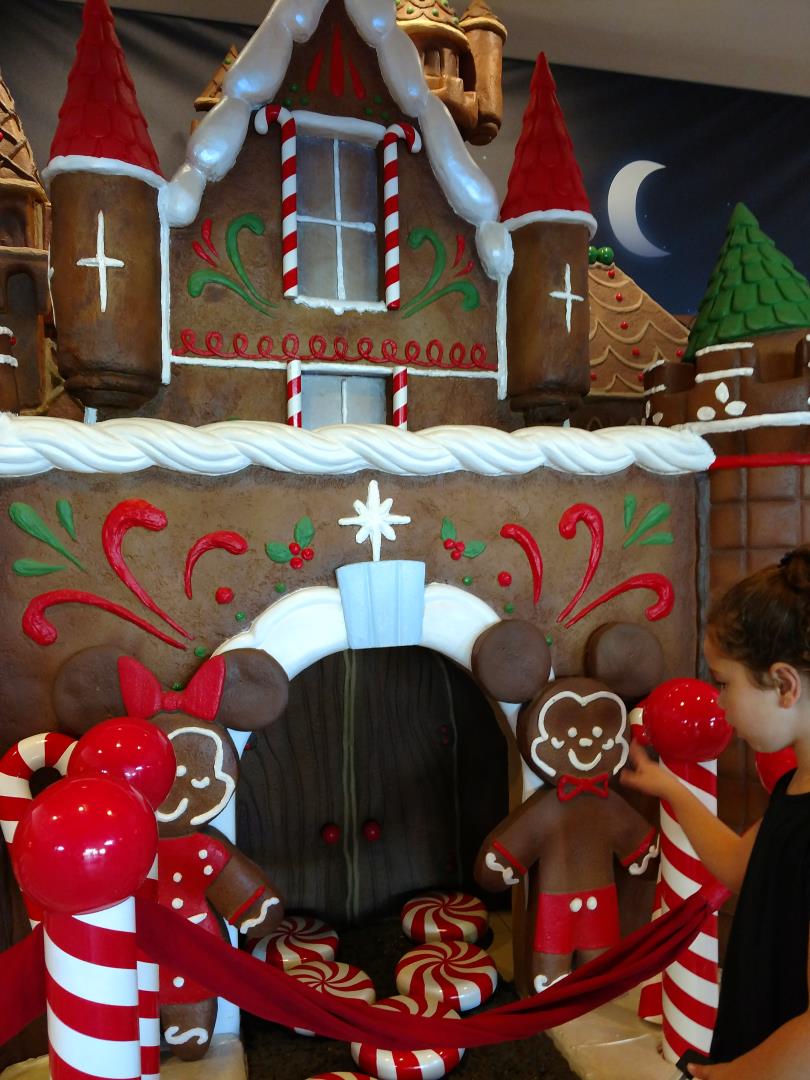 To view our photos from this Disneyland trip click here:  https://flic.kr/s/aHskATk1QT