I visit Disneyland often, almost annually but probably bi-annually for sure.  I just realized that I wrote up my review for 2013's visit, but failed to write a review for 2012.  Oops...so first things first.   In February of 2012, I went to Disneyland with my best friend and her two kids- ages 6 and 10.  We stayed at the Disneyland Hotel and this was just after they completed a major renovation of the entire resort- so you can see the updated resort through my pictures located on my Flickr site here:  DISNEYLAND RESORT HOTEL PHOTO ALBUM.

Since I am writing this two years later, I will say briefly that we had a great time.  It was off season, mid-week and it was not crowded- we were able to see and do everything that we wanted to do.  I did my usual Long Beach flights on Jet Blue, we got a taxi cab to the resort and everything went very smoothly.  The Long Beach airport was going through an extensive renovation at the time, but my Disneyland 2013 review talks about my first glimpse at the almost completed airport renovations. In 2012, Cars Land was not open yet, but fully under construction and the kids anticipated their next visit.  Well....here we go-Disneyland Visit 2014!

We went with our best friends and their three kids, ages 12, 8 and 4.  It was Princess Brooklyn's first time to Disneyland and she was as excited as any 4 year old could be!

HA! Not as smooth this time around, but can't blame anyone but the weather man and the fact that SFO is not the best airport when weather factors contribute.  Our Jet Blue aircraft could not land in SFO, it was diverted to Oakland, so when we got to the airport for our flight, we were told that Jet Blue was going to shuttle us to Oakland and hold the plane.   At the end of the day, we did make it to Oakland in traffic it took 90 minutes, we stressed out not being sure if the plane would be held, at one point being told over the phone that it would not be held and then when arriving at the Oakland airport being told that the plane might have left.  Well, it didn't leave, we ran to the gate (along with about 20 other passengers on two other shuttles), we had encounters with TSA agents who were not consistent with the rules...but we made it!   We landed into Long Beach about 45 minutes later than planned, retrieved our luggage and our shuttle was waiting for us- smooth ride to the hotel.  I will say that upon returning home, I had a $50 travel bank credit from Jet Blue email for the inconvenience, so they were proactive before I ever had time to get home and write a letter to customer service!

This time around we stayed at Disney's Grand California Resort.  It had been quite awhile since we've stayed here - at least 5 visits ago, but the hotel once again did not disappoint.  It's beautiful and really not much has changed.  Of course, being December everything was decked out in true Christmas fashion making the Happiest Place on Earth just  a bit happier!   We had a standard room and although it looked out over the parking lot and in the distance you could see the Disneyland Hotel towers...the trees in the parking lot were decked out with lights, so you really didn't notice that you overlooked the parking lot.  They should keep those lights up year round!   I failed to take pictures of our room, we were just so very grateful to be there, get unpacked and to bed since it was getting late (we stopped at Storyteller's Café for dinner after checking in to catch them before their 10pm closing hour).  But the rooms really looked the same as I remembered them to look, just updated linens, refreshed, etc. 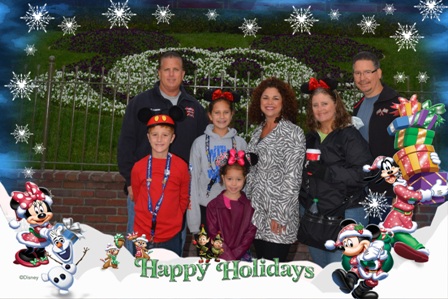 We had a few pre-planned meals for our 3 night stay so that we could meet characters, princesses and celebrate special occasions.   Our first day we had breakfast at the Plaza Inn, my favorite character dining venue because it's so convenient right there in the park after you've spent a few hours doing rides.  Our friends had never dined there and they were surprised at how convenient it really was and what a great idea to dine there vs. rushing back to the Disneyland Hotel to Goofy's Kitchen.  Don't get me wrong- I love Goofy's Kitchen too, but you either need to start there early in the  morning before the parks or else pick another meal time. 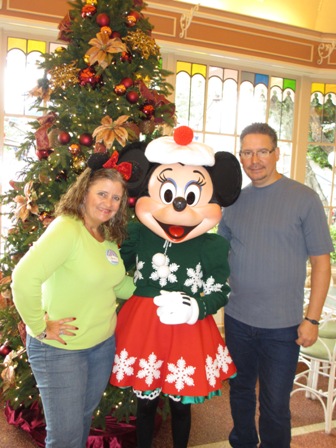 That evening we had dinner at Napa Rose to celebrate both Mike's birthday and my belated birthday.  We've dined here once before, but again it was new to our friends and they were very happy with the service, the meal and the overall ambiance.  It was a great experience and worth every penny!  They had a butternut squash soup that was amazing!   What's nice is that the menu here changes with the seasons, so if you travel at different times of the year you are likely to have a different menu! Always inspired by local fresh flavors!

The second day we spent at California Adventure and we had a Princess Lunch scheduled at Ariel's Grotto so that Miss Princess Brooklyn could meet several Princesses without having to spend time in various lines!   An AWESOME idea!  It's really cute, they announce each Princess one at a time and let them circle the  room and they efficiently make it to each and every table to sign autographs and take pictures.  We met  Jasmine, Rapunzel, Snow White, Cinderella and of course Ariel!  Brooklyn was in little girl heaven!   The meal itself is a set menu with 4-5 choices and comes with soup/salad and dessert.  They do have a full bar and those drinks are not included in our prepaid character meal voucher- but that was no problem.  We had very good service, a little lacking in the bussing of the table between courses, they probably could have used another helping hand.  Food was very good and big portions!

That evening we had reservations at the Wine Country Trattoria for World of Color dinner.  We did have some service issues and the meal took a very long time- in fact we were so delayed that we barely made it to the World of Color show and they knew we were going to the 845pm show.   Food was good, but we probably should have reversed our dinner nights because coming here after dining at Napa Rose left us feeling a bit disappointed.

Our last day we didn't have any meal plans, we picked up breakfast at Starbuck's on our way to the parks and then had lunch inside Disneyland at the Mexican restaurant that sits right next to Thunder Mountain in Frontierland and at the gateway to the Royal Theatre walk through.  It was very good, not great but good for an amusement park Mexican themed restaurant.    Dinner was at the airport that evening before coming home.

We spent a full day in each part and then our last day spent about 5 hours in Disneyland.  We did not get to see or do everything.  Tuesday & Wednesday were not very busy, Thursday was off the hook crazy!  With 7 people having different ideas of what to do and where to go next, it was a bit challenging to make everyone happy but at the end of the day it's about making the kids happy because if the kids are happy, then the adults are happy!    I can't say that I experienced anything new at the parks this time around other than the Royal Theatre in Disneyland- we did take Brooklyn to see one of the Princess shows- our time slot was Beauty and the Beast and it was done very well!    The World of Color show has been updated to include songs and pictures from "Frozen".   We did try to view the Christmas Holiday parade twice our first day but due to inclement weather they had a substitute "Mickey Cavalcade" which was a joke.  We were lucky though to make it back Tuesday evening before dinner to see the parade. 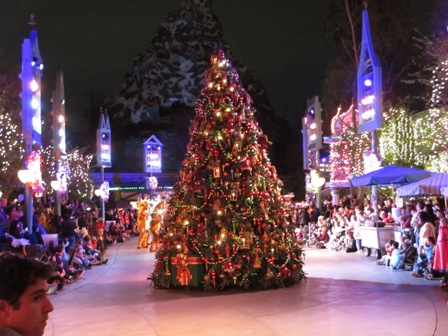 Other than the "Frozen" additions, I didn't notice anything different from my previous times of seeing the holiday parade...but it's still pretty spectacular to see!   Of course, this was our first time staying at one of the Disneyland resort hotels with Cars Land open and operational.  When my husband and I went last year we stayed at an offsite hotel and did not have the early entrance- which is HUGE!   This time we were able to get to the park around 730am and went directly to the Radiator Springs Racers to ride, when we got off, we went to get a Fast Pass to ride again.  Our "come back" time was about 10am, so we went back to ride again and then secured another Fast Pass afterwards with a "come back" time around 2pm.  So we got to ride 3 times and that saves so much on time.  Also, the single rider line is a great way to get on the ride faster if you don't mind being split up from your group.  Also, another perk to staying at the Disneyland Resort hotels and the early entrance is obtaining the special ticket to come back and meet/greet Elsa & Anna from "Frozen".  We were there just about 830am and our "come back" time was close to 5pm.  Those tickets sell out very fast, so I'm happy we were able to get them and our little Princess was able to meet her favorites!

Disney Photo Pass Plus is a fabulous deal!  On our first day having breakfast at the Plaza Inn, they come around with your welcome photo and it always looks so good and you know you want to buy it for $35 which includes one large and 4 small copies and a picture of Minnie!  Well with the Disney Photo Pass Plus program, for $100 plus tax you are given a special scan card and CD packet and you are then able to get all of your photos taken by the professionals inside the parks as well as the 'gift packs' at the character dining venues!  Since we were two families, it was $50 each because of course we want the same pictures!  We stopped to take a lot of pictures by the professionals and it was awesome to have access to all of them.  Also, they include any pictures taken on the rides as well- you just get your card scanned when you come off the ride!   Very cool and very convenient and affordable! 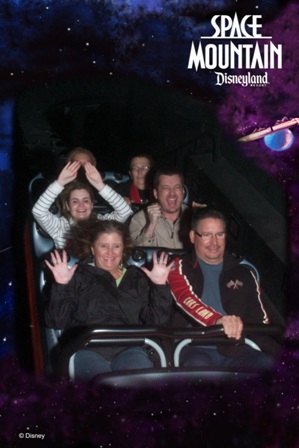 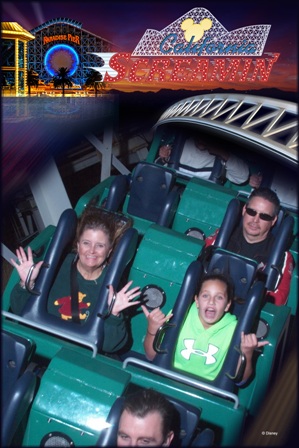 All in all- we had a GREAT time.  As the childless couple though, I will say that traveling to the parks with kids adds an entirely new dimension to exhausted!   I love Disney and I  love Christmas, so this really is the meeting of two passions of mine and Christmas really does make the Happiest Place on Earth a bit happier and it was truly something that I personally needed this holiday season!   How can "It's a Small World" all decked out for Christmas not put a smile on your face? 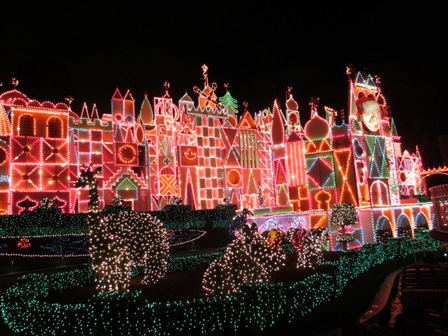 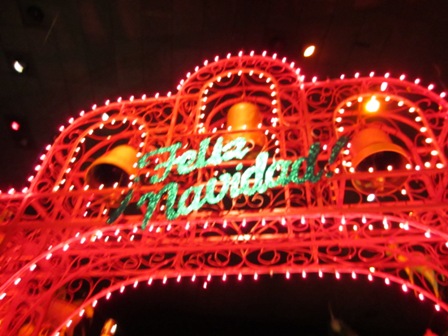