ALLURE OF THE SEAS – ROYAL CARIBBEAN – 2 DAY CRUISE TO NOWHERE

I am sure if you’ve read many of my reviews,  it is very apparent that I am partial to the Royal Caribbean brand, they are my favorite with their sister company, Celebrity Cruise Line being pretty darn close on the list.   I was thrilled to received an invitation to the 2-day pre-inaugural cruise to nowhere on the brand new, World’s LARGEST ship, ALLURE OF THE SEAS.

First of all, because these events usually sail out of Florida, it’s not always easy for us West Coast agents to attend, but all the cards were lined up when this invitation came over and seeing as it was my birthday week and a holiday week (Thanksgiving), when my business tends to slow down, I could not pass up the chance to see this beautiful ship!

GETTING TO THE SHIP:

Due to time constraints, we did opt to take the red-eye flight from SFO to Fort Lauderdale, I still hate them and I still say I won’t do it again; however, in a pinch you do what you gotta do.   We flew Jet Blue this time (our second favorite carrier to the Sunshine State), cost influenced the decision and the flight was fine.  Fortunately, even their regular seats have plenty of leg room, so we were as comfortable as one could expect.  I still don’t sleep well on those flights though, so we did the best we could.

An on-time arrival into Fort Lauderdale at the crack of dawn and off to meet up with a colleague who was traveling in from LAX with her son.  We had breakfast at the airport to kill some time and then had to wait for the shuttle service to the pier, which was not going to start until approximately 1030am.  I do want to stress though for any of my clients taking red-eye flights to meet a cruise, do plan to kill time at the airport.  The cruise ship terminals are not all equipped to handle early arrivals, so it could prove to be uncomfortable waiting to board the ship.

Once we were on the shuttle, it was a quick drive to the pier, we walked into the NEW terminal that Royal Caribbean built specifically for the OASIS and ALLURE of the SEAS.  Everything was wonderfully organized, odd decks to one side, even decks to the other side and then on each side about 5 lines per deck for you to choose from.  The process was very quick and efficient.  Afterwards, we were shuttled up to our waiting area for about ten minutes until we were then able to board the ship.

Once we were on the ship, we were off and running.  We entered into the Royal Promenade area- which is a trademark of Royal Caribbean ships and the atmosphere is just electrifying.  Several eateries along the Promenade including: Sorrento's the 24/7 pizza, the Cafe Promenade with quick service items (finger sandwiches, danishes, cookies, coffee, etc),  Cupcake Cupboard (fee), Starbucks (fee), multiple watering holes and of course the new signature to this class of ship the “floating bar”.  This bar moves amongst three decks- it’s pretty cool!

This ship is divided up into “neighborhoods”.   Each neighborhood has a different ambiance and purpose.     Central Park, Boardwalk, Pool & Sports Zone, Royal Promenade, Vitality Spa at Sea & Around the ship are the different areas.

Central Park is literally an outdoor park, situated mid-ship and filled with trees, park benches and winding paths.  You have some of the most elite dining options in Central Park including Choppes Grill Steakhouse,  150 Central Park,  ….., The Wine Cellar and several upscale shops.  There are cabins that look out to Central Park either by window or balcony.  We had one of the Central Park Balcony cabins and it was a nice change; although I really do love the mesmerizing fee of staring out at the ocean.  It was a nice option though of feeling “outside” when you really only had an open sky above.

(Our cabin and view from our cabin ~ Central Park) 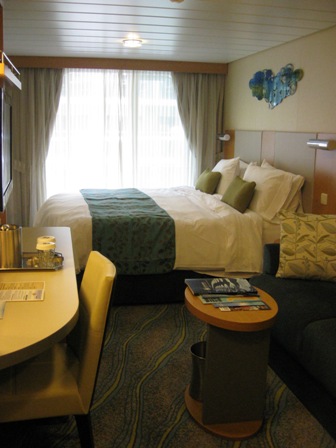 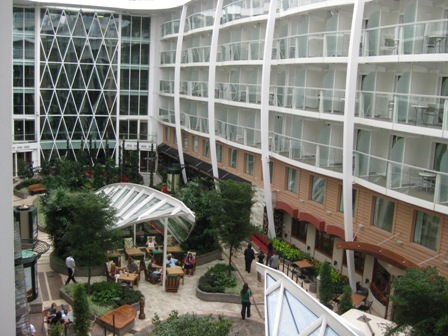 Boardwalk is your equivalent of Santa Cruz Beach Boardwalk, Coney Island or similar.  There is a real life working carousel (yes we did ride the carousel), a hot dog hut, ice cream shop, Johnny Rockets &  Rita’s Cantina Mexican Café.  This neighborhood is very lively, you have jugglers, musicians interacting with guests.  It’s all open air with some balcony cabins that face the boardwalk area- so you can have a “Boardwalk View” Balcony cabin.  Something to keep in mind though, if you like to sit out on your balcony and want serenity- these are not the cabins for you.  The boardwalk does get very noisy!

At the end of the Boardwalk is the Aqua Theatre- an innovative first at sea – this is what the name implies- a water theatre.  We were able to see a preview of the types of shows they offer at the Aqua Theatre with high divers, acrobats, “Cirque” type of moves way above the air.  It’s quite amazing what they are able to do for entertainment on board a ship these days.   They also previewed a light/water fountain show that was absolutely incredible.   Something to note, from some of the Boardwalk View balcony cabins, you may have a partial view of the Aqua Theater and be able to see that from you own balcony.   There are at the aft ends of the ship, the Aqua Suites, which all come with huge balconies that do afford a full view of the Aqua Theatre.  There is also a big screen TV and two smaller, but still big screens on each side for other viewing when shows are not in progress.  They had the NFL games on the screen during the time we were visiting. 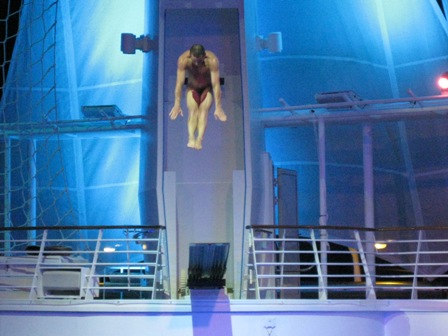 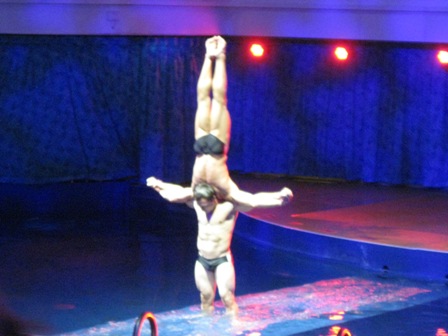 The Sports Complex area consists of rock climbing walls, basketball court, Flow-Rider, surf simulators and a zip-line that zips you over the Boardwalk area.  The Zip-line was not as long or big as I had expected from the renderings…but still a very cool experience.

Then around the ship there are  several  small venues for dancing, music listening, comedy shows, ice skating shows- yes there is also an ice-skating rink on board this ship and when not in use for shows, they do open it up for open skating for guests.    There is never a lack for things to do.  Yet at the same time if you don’t want to do anything, there are plenty of serene places about the ship to just relax and take in the beautiful ocean view.

Naturally, on such a short cruise we didn’t have time to enjoy all dining venues (thank goodness); however, we did sample a few different places.  Our first night, since we were exhausted from the red-eye flight, after the muster drill we took a power nap so that we could enjoy all that the evening entertainment had to offer.   We decided to take in a quick dinner at the Windjammer Café- which is the buffet restaurant.  There are always lots of options and we got a few favorites and then moved on about the ship.   The next day because we were up so late, we missed breakfast (which is par for the course for us), but did manage to have lunch at Johnny Rockets.  We were aiming for Rita’s Cantina, but it was peak lunch hour on the first day that this venue was open, so many of the Cruise Line employees and media who had been on the ship for several days prior to us were wanting to try the new venue.   That night we were invited to have dinner in Chops Grille and that was excellent ~ as always.   Only select few were invited to dine in the specialty restaurants during the 2 day cruise, so it was surely an honor to have been selected.    The next morning it was up and off the ship early for our return flight home, so that was pretty much it for our meals.

This ship though has your large dining room where guests can elect to have first or second seating or they can also opt for Anytime Dining and make reservations for different times each night.  The Windjammer Café is always available and  then there are the other options for which you pay a small fee – anywhere from $5-40 per person for the dining experience.  Quite honestly, for those who are foodies and really do enjoy a fine dining experience, you have to try a few of these out during a week-long cruise.  However, the dining in the main, free venues is always very good.   You also tend to develop  a relationship with the wait staff when you dine in the same venue night after night.   It really comes down to personal preference.

Of course, dancing is always one of our main concerns and we were very happy to see that the disco had both live bands and DJ and the disco floor was decent.  It could have been a bit bigger, but it worked and best of all it wasn’t sticky.  We did dance for hours both nights on the cruise.   There are other venues around the ship with dancing- but we preferred the venue that looked out to the aqua theatre overlooking the Boardwalk Area.

Comedy shows, Jazz Club, Ice Skating show, Aqua Theatre shows and full scale Broadway productions are all part of the included entertainment on board OASIS and ALLURE.    One must take all of this into consideration when comparing the cost of a cruise on one of these vessels compared to another in the fleet that does not have all these bells and whistles.

Dreamworks and Royal Caribbean have a new partnership, which means that the Dreamworks Characters are on board the ship.  Shrek, Madagascar Characters,  etc. make appearances and also hold a character breakfast- for free a few times per sailing.  Reservations Required.

Of course the pools are wonderful and there is a FABULOUS adults only area at the front of the ship with some comfy chairs.  The adults’ pool is a bit small, but most adults just dip anyway.

The spa and fitness center are huge- I think the largest at sea.  Every piece of equipment you could hope for along with fitness classes and a ton of spa services.

I got off this ship wanting to say on for another week and was really bummed that we had to get off so quickly.  I know that I will for sure take another cruise on either of these fabulous ships sometime soon.  I know there are several clients and friends who would love this ship.

Everyone always seems to be a bit concerned that the ship has 5000 passengers on a normal basis, but I can honestly say that there are so many small, intimate venues and the ship is laid out so efficiently that I never once felt crowded and I felt that the cruise line perfected crowd control.   Everything went very smoothly.

I can also add that service was impeccable throughout the two days we were on board.  Granted, they crew knows they are there to impress media and travel industry folks; however, whenever a new ship comes out the cruise line moves the best of the best employees from their current ship to the new one.  These crew members earn that honor by doing a good, consistent job day after day after day.

Just an added extra, while we were on board a movie was being filmed, “Jack & Jill”, which is due out November 2011 starring Adam Sandler – so if you don’t get a chance to cruise that ship before that time, you should see the movie to see the ship on the big screen!

To see plenty of ALLURE pictures, and lots of insides of cabins..click this link: